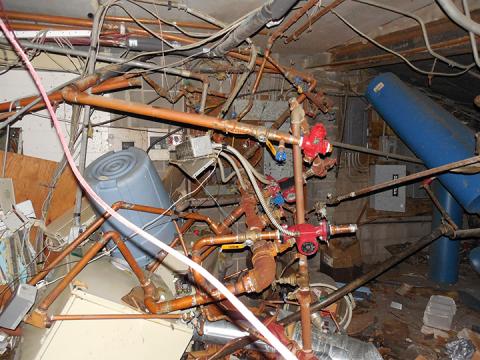 This investigation report, created by state officials, concerns a 1960 Weil McClain hot water heating boiler that had a BTU input of 625,000. The explosion detailed below occurred in February 2013.

Too small for inspection

The subject of the accident, the 1960 Weil McClain boiler, was originally connected with another boiler of the same size. In 2000, the second boiler was removed.

In 2001, the facility created two separate heating systems for the buildings. This allowed them to install two additional, smaller boilers, on a separate system, to heat a portion of the building while the 1960 Weil McClain boiler alone heated the rest of the building.

After the change, the separated boiler systems were less than 750,000 BTUs and no longer required, under Minnesota law, to have a licensed engineer operate the boiler nor required to be inspected by a commissioned boiler inspector.

According to our investigation, the heating system for the subject boiler leaked somewhere, and employees were constantly adding water to the system. One of the maintenance personnel believed he had fixed the leak so he isolated the make-up water to the boiler. In doing so, we believed that the low-water cutout was isolated from the boiler. This allowed the low-water cut-off to remain full of water. The boiler system still had a leak and the boiler continued to slowly drain.

Even after the boiler was empty of water, the boiler continued to fire.  We don't know if a zone valve opened, but water made it back to the now red-hot boiler and caused the pressure boundary to fail. This resulted in a catastrophic explosion causing extensive damage to the building.

While there were no injuries due to the explosion, the 10 children that were at the daycare facility  had left the building only 40 minutes prior to the blast.